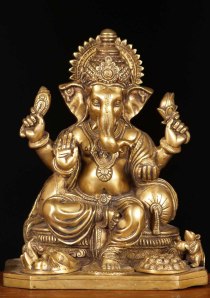 One of my favorite deities of the Hindu panoply of gods is Ganesha. He is fantastic. I forget when I was first introduced to him, but I have always felt a certain fondness for him, and enjoyed learning about him; the myths, the mantras, the devotions, the festivals.

The popularity of Ganesha extends throughout many of the religions that originated in India. Hindus, Buddhists, Jainists, all seem to venerate Ganesha, and it seems quite a few people outside of that religion, who also are drawn to him.

His origin story is quite well published, and if you want to read it, well, Google it, but I will do a quick paraphrase here. He is the son of Parvati, the wife of Shiva, who was created to guard her while she took her bath. However, while Parvati was bath, Shiva returned and sent some of his followers to call upon Parvati. Ganesha denied them, and beat them soundly when they attempted to trespass. Finally Shiva came to see what the problem was, and not knowing the boy was his wife’s son, they fought. Shiva won, but before Parvati could stop the conflict, Shiva had used his destructive third eye upon the youth, destroying his head. In order to revive him, another head needed to be found, which was an elephant head, which became attached to the boy’s body and he was then revived. There are quite a number of different versions that fill in various details and explain various things, but that is the very short hand version of the story that I first heard.

He is associated with having dominion over many things, but his main attribute is the Lord of Obstacles. While mostly often he is asked to remove obstacles, it is also said that he can place obstacles in the path of people who need it. One of his names reflects this power where he is identified as Vighneshvara, which literally translates as Lord of Obstacles (shvara – lord and Vighne being obstacles). There are other variations of this name, but the meaning is considerable consistent. The obstacles he governs are both physical and metaphysical and can be people, places, concepts, spiritual issues, illness and many other things. For this reason he is often called upon when beginning a new venture, to remove obstacles that may obstruct it, as well as when engaging in ritual, to remove obstacles that would impede the success of the ritual.

Another name and association is with knowledge, wisdom and learning. The concept I learned with that is his name Ekadanta which means “One Tusked” as he is often portrayed with only one complete tusk, the other one often broken off and being held in one of his hands. I have a small clay statue showing him holding this broken tusk, and it seems he was using it as a writing implement. The story that I learned is that it was Ganesha who first created writing, and started to write down what other gods said, that it might be preserved and remembered. As he was doing so, his writing implement broken, and there was nothign to replace it. So he broke off his tusk, and dipped it into the ink and continued writing. Because of his connection to knowledge, wisdom and learning, he is also sometimes known as Buddhi’s husband or Buddhipriya, buddhi being a sanskrit word for knowledge and wisdom which is a feminine word and priya meaning fond of, lover or husband.

Ganesha is also associated with a number of other concepts. It is said that the OM is his nature. The swastika is a very popular symbol and it is widely associated with Ganesha. Many statues from the subcontinent of Ganesha often have the swastika prominently displayed on Ganesha, or used in his depictions. He is also said to dwell in the muladhara chakra, as it said the “he holds, supports and guides the other chakras , and thereby governing the forces that propel the wheel of life”

The largest festival associated with Ganesha is Ganesha Chathurthi. This annual festival of 10 days happens in early autumn, typically at some time in August or September (because it is based upon a lunar calendar, the dates vary in the Gregorian calendar. You can google the date). Originally a small family orientated festival, it became a rallying point for Indian independence from the British, and for that reason is widely celebrated across the country, but especially so in specific states and in Ganesha specific temples. The beginning of the festival is marked by the arrival of Ganesha, usually as a large statue. At the end of hte festival, the statue (or statues) are then taken to nearby bodies of water (lakes, rivers etc…) and submerged. While this tradition continues, there has been some discourse over it, as the original statues were often made of clay and would just dissolve into mud, many modern statues started to be made from plaster of paris, which is filled with toxic chemicals, and then painted with toxic paints, which would then pollute the bodies of water. While I have read that some areas have returned to using clay and non toxic pigments, others have started using reusable statues also colored with non toxic paints and dyes, and so they retrieve the statue from the body of water after a few days.

If you want to engage in devotion to Ganesha, a very simple way is through offering him incense and sweets. While he is often depicted with a bowl of traditional indian deserts, I have found he likes all maner of sweets and candies. Including incense (sandalwood is a good choice) is always good, as would including some kind of liquid, even water. The most commonly recited mantra to Ganesha is “Aum gam ganapati namah” Ganesha is very often identified with the color red, although white also is used, along with blue, and it seems orange and yellow are also popular (although usually used with different roles of Ganesha).

And now a little devotion for you