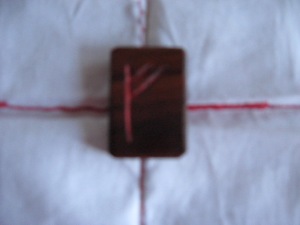 Feoh or Fehu is the first rune of the runic alphabet. It is from this letter that begins the general name of the runic sequence Futhark or Futhorc. The meaning attributed to Feoh is that of wealth, gold, valuables and by association from older cultures, cattle, the medium of understanding how wealthy a person or household might be. I mainly think of it as just wealth or gold as the best representation for modern day understandings. The name of this rune is see as the foundation for many modern words like finances, fees, fiscal and other words that relate to money and wealth that start with a similar sound.

After love magic, I would say that most people coming looking for magic to help make them prosperous, wealthy, rich, or at least financially stable, free from the upsets of unexpected losses, bills, fines and complications. Considering that the major cause of so much stress for many people, couples, and life in general in the modern US is based around wealth, including some of the biggest issues of economics, jobs, employment, social security, the costs of healthcare and so many other things, it can really get a person or a family down.

Wealth and prosperity magic is probably more practiced in some ways then love magic. While some people have various ethical reservations about getting someone to love them through magic, most people do not feel as complicated as doing spells to get themselves to get jobs, find money, or ensure financial favor and support. I know that I myself certainly have no problems with it, and work it often enough. Yet, so much of our culture has this divide between “materialism” and “spirituality”. When you meet a spiritual teacher or practitioner who is rich, people often look askance at them, seeing something questionable and perhaps fraudulent in what they are doing. Yet at the same time, some of these same people might completely ignore long standing spiritual and religious institutions who have more wealth then most of the developing countries in the world.

Yet, I myself find it particularly valuable in seeing the spiritual side of wealth, as well as the spiritual benefit of being enlightened, and applying that wisdom and gaining and managing my wealth, but also the wealth of states and nations. I think it would be much better to have someone who has compassionate enlightenment and reason to be thinking about how to best serve the management of the wealth of a nation then the greed and corruption which clearly plagues the economic systems of the world now.

To meditate and contemplate wealth, prosperity, and abundance not only of spiritual things, but of how it can serve to turn material things into their true spiritual natures is something that can be gained through working with Feoh. Carve it into a candle, or write it on a paper which you then dab with some kind of money related condition oil. Draw the rune from your rune bag and sit with it, either before you, or held in your hands. Chant the name, or draw it in the air with energy and intent and press it into your etheric and astral bodies. What does Feoh tell you about your relationship with Wealth? What would be enough? What do you really want and need to be prosperous?

Feoh, wealth, favor, blessings – feoh gains all of these things and shows that they are given. But to continue to the good fortune, they must be given to others, from what you already have, and so more blessings may continue.

Feoh marks today, and indicates that good fortune will be gained in all areas of wealth, money and finances. You might find that your Ebay item has sold, or a bill that needs to be paid has been in error, and was already reconciled. It also is saying that today is a good day to work all manner of financial magic, as that magic will be enduring, because of the influence of Shtan, as the rune of the week.

So, I am not sure who did it first, but, for some reason, every book writer on runes out there seems to give “cattle” (as in cows) as the meaning for Feoh. A closer meaning would be chattel (a unit of personal property), which is related to the word capital (as in money). I don’t know who started this trend, but if I could travel back in time to correct it, I would.

If you want cows go to Ur, the auroch aka Bos Primigenius. That is cattle.

Feoh, the rune of wealth marks the last day of Saturn in the month of May. It shows that wealth, money and movable valuables may be of influence today, and also how you and others relate to those valuables. Upright, it is generally a more benevolent sign, showing skill in handling wealth, and perhaps also increase or benefit.

Part of the poem itself expresses an interesting concept of how wealth was viewed and treated by older Scandinavian cultures. The line “Yet must every man bestow it freely, if he wish to gain honour in the sigh of the Lord” reminds me of a concept that was much discussed by wealthy people in the US in the turn of the 20th century. This concept, to use the French terminology (which is how I learned it) was called “noblesse oblige” or the obligations of the nobility. As there are no “nobles” in the US, it was the idea of the rich and wealthy, that they have obligations to better society by using their money and resources in a benevolent way. From this is why there are so many buildings named for wealthy donators, like Carnegie Hall or in Los Angeles, Disney Concert Hall and others. They exist because these people and organizations felt that they need to give money to improve their society and community around them, and in doing so, they gain in honour. While this is a concept more tied with Gebo, it also has strong relevance to Feoh, as the rune of Wealth, which is often the unit of exchange.

Wealth is a comfort to all men;
yet must every man bestow it freely,if he wish to gain honour in the sight of the Lord
Feoh is the rune of Wealth, Gold and Riches. As it is the wealth rune of portable wealth, it seems that when most people I have met who know anything about runes, it usually involves Feoh and how they can work with it. It does tend to bring money with it wherever it appears or is used. Sometimes that means it needs to be spent, without fear or concern and know that the expenditure will bring benefit. Other times, it will be coming to you. Either way, it is best to have a little financial wisdom when seeing this rune appear.

Wealth is a comfort to all men;
yet must every man bestow it freely,if he wish to gain honour in the sight of the Lord.

Feoh translates as Wealth. Other Rune Poems indicate Gold. For some reason, a lot of contemporary authors say Cattle, but that is NOT the original translation of this rune. While it could be taken there through a kind of abstraction of pastoral ideal (the men in past traded cattle for wealth, while has roots in historical accuracy, is not the whole substance).

I think Feoh is one of the many runes that people really enjoy. Why? People can’t seem to have enough wealth, money and stuff. I can’t blame them. Money itself, is not a bad thing, and if that is what you want, go for it. Feoh of course, can help you with Wealth, Money, finances. It is the audhruna (wealth rune) of all Wealth Runes. Feoh shows wealth and abundance, and is especially favorable in readings related to money and finances. But it can show that wealth in other types of readings too. The immaterial wealth of love, family, social acclaim and fame, are often sought after by people and can grow in abundance. Like the poem indicates, by sharing that wealth, you can gain honour and dignity, and that wealth will often grow with it.