March 18 is the Feast day of the Gabriel the Archangel in the old calendar. Currently, all the angels are observed on Michaelmass which is now known as the Feast of All Angels, but original the archangels had their own separate feast days.
Gabriel is my favorite angel, who I often feel is overlooked and underappreciated. I felt drawn to pray to them and make devotion many years ago, which prompted my research into his feast days (The Orthodox church has several feast days for them on different days, the Ethiopian church also has a separate feast day) but also various prayers address to them.
the name Gabriel means “Strength of God” and some prayers that address Gabriel call upon their divine strength for help and support. They are also identified as the Holy Messenger, especially in Catholic and Orthodox Christianity, as they is identified as the archangel who appears before St Joseph, Virgin Mary, and others announcing the conception of the Christ Child. In Islam, They are also a messenger, who gave the Koran to Mohammed. In certain esoteric practices Gabriel is also the messenger who inspired other works, most famous they taught the art of Geomancy to Idris, a prophet who is also identified with Hermes Trimestigus.
If you feel so inclined, make a prayer, light a candle to Archangel Gabriel today, and ask for their strength and to receive divine messages of guidance. Gabriel’s intercessions can bring many blessings. 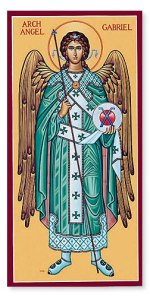 During this holiday season, with so much bustle and hurry going on, it’s a good time to look to spiritual aid as a way to help manage the stress, and connect with Higher Power.

One of the obvious signs of benevolent influence is the familiar image of an Angel. As it is Christmas, stores are positively busting with images of Angels, flying, signing, playing instruments, and otherwise announcing the birth of Christ and the glory of God. This is an appropriate role for Angels, as their name, descended from the greek word “angelos” means messenger. So, in their role, the bring messages from God to us.

The most famous angelic messenger is of course Gabriel. Gabriel means “The Strength of God” although in most of his roles in the bible (he only appears twice) is as a messenger, bringing to Zacarias, a man who is married to a cousin of Mary, that his wive shall conceive and bare a child, and that child becomes John the Baptist. Then Gabriel appears before Mary, announcing to her that she shall conceive and bare and child, and that child will be Jesus, who will be called the Son of God.

Because of his role as a messenger, Gabriel is often called upon to aid in communication, or people who use communication as a living. As his message was about pregnancy, he is also called upon to help with pregnant women. Although, during this holiday season, I see communication as taking a key precedence, as the sending of cards and letters, phone calls to family, and just helping the cheer of the season spread with kind words and well wishes is of a great benefit.

Of the ways you can call out to Gabriel for his assistance, is with some token image of Gabriel combined with angelica root, also known as Archangel root. Put the image of Gabriel up and place next to it the Archangel root, and offer a prayer up to Gabriel, asking for his aid and blessings. You might wish to sing the prayer, as Gabriel is fond of music, and is well known for his Horn, by which he calls attention to his announcements.